This type of surgery is performed by experienced European Professors-surgeons, who have over 25 years of surgical experience, which is the best guarantee to patients for the successful surgical outcome.

Special hospital SVETI VID is one of a kind institution in these regions with specially formed department for macula, with complete diagnostics and treatment for yellow spot diseases and macular surgery.

For better understanding of functions of particular parts of human eye, it is often compared with camera. The light passes through transparent structures of the eye (cornea, lens, vitreous body, what is analogy with optical part of camera) it is refracted and focused in the back part of the eye-retina. Retina is acting as film in the camera, absorbing and changing light into neuro impulses travelling to brain, where they are analyzed and the consciousness about viewed object is generated, actually we receive picture of viewed object.

Special part of retina responsible for central vision and detail differentiation is MACULA or yellow spot. It is abundant with photoreceptors – cells which receive visual stimulus and transmit it by neural elements. Dens organization of cones in macula enable the sharpnes of vision, detail information and face differentiation, reading, writing, color distinction…

Damages to macula lead with time to loss of central vision- “central blindness”. Because peripheral sight is preserved, this is not complete blindness, so the patient would be, through the program of rehabilitation, taught to use peripheral vision, with aids- low vision systems.

Degeneration of yellow spot is one of burning problems in modern  ophthalmology. It is closely tied with population called by old terminology age related macular degeneration (ARMD), but it is more often to occur even in younger population. It has two forms : dry AMD and wet AMD form.

Risk of occurring of senile macular degeneration significantly rises with age of life. In population of 65 – 75 years of life the risk is about 10 – 20 percent. From the ages 75-85 years risk is already 35 percent.

Genetic predisposition is no doubt important risk factor. Children of ARMD parents have increased risk of incurring it.

Danger is excessive exposing to particularly blue part of spectrum, and especially in people sensitive to light and of pale complexion. Recommendation is to wear glasses with protective filter- particularly at ocean or snow.

Other risk factors are identical to risk factors for atherosclerosis development: smoking, increased level of lipids in blood, deficiency of certain vitamins in diet – C, E, A.

High blood pressure and cardiovascular problems can speed up development of changes.

Smokers with close relatives having macular degeneration are under two times greater risk of developing the disease.

As a result of macular damage central vid has defect, without possibility of improving it with glasses, but with conserving peripheral vision, so it is not about complete blindness. Patient needs to see ophthalmologist if noticing symptoms like decreased contrast sensitivity, prolonged adaptation to dark, decrease of visual acuity, appearance of stains in central vision( central scotoma), or distorting images…

Although it attacks both eyes, this disease usually is not equally present in both eyes, so “better” eye compensates therefore the patient does not notice the appearance of first signs in time. Because the changes in macula do not cause pain and initially present only discreet visual disturbances, that are binocularly viewed not noticeable, it is wise to go to regular ophthalmological examinations- each 6 months, or test at home (periodically test each eye individually by examining rectangular patterns). Noticing irregularities in rectangular patterns or blur in central part of Amsler grid is an alarm to see ophthalmologist.

With further development of macular degeneration visual acuity is decreasing more, until loosing ability to read, and inability to recognize the face of person talking with. 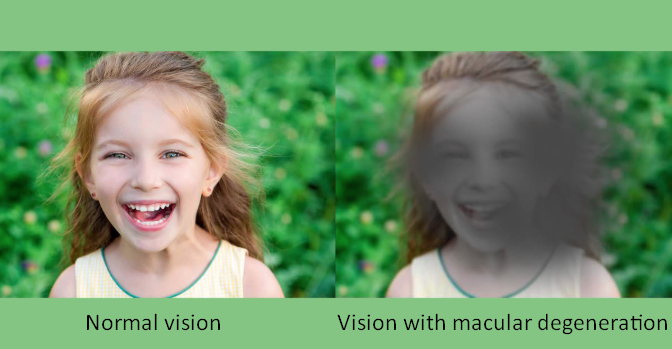 Changes take place on the level of retinal pigment epithelium (RPE) and Bruch’s membrane (extracellular space between RPE and choroid vasculature, rich in collagen). As a result of metabolic changes and inability of RPE to fill the role of protection and “cleaning” it happens that “unprocessed” material in shape of deposits (drusen) builds up, and encumbers normal transport of matter between choroid and retina, decreasing nutrients for macula via choroidea.

Scattered discontinuously or of confluent appearance, between RPE and Bruch’s membrane, drusen are manifestation of dry macular degeneration. Defects progress slowly and central vison is not compromised immediately. Progressing the disease occur smaller, then larger defects in visual field and central picture. Elevation and destruction of pigment layer is an introduction to more difficult form of macular degeneration (atrophic form), with destruction of vision.

Dry form of macular degeneration is far more frequent than wet form (90 percent of patient with macular degeneration). Because of danger to changeover to wet form, characterized foudroyant loss of sight, it is very important to educate patient for self-control of visual function, so that symptoms would be timely noticed and treatment started.

Choroidea is coating layer of the eye comprising of blood vessels and providing oxygen and nourishment to retina nearby. It is wrapped with thin membrane called Bruch’s membrane, or base of retinal pigment epithelium.

In conditions of ischemia, vascular defects, metabolic changes, oxidative stress , with occurred changes at RPE level, nature tends to “repair” defect creating newborn blood vessels (choroid neovascularization or CNV), by which is even more distorted the architecture of tissues. Newborn blood vessels are of poor quality, leading to leakage of fluid and blood beneath and into retina. These are characteristics of wet form of macular degeneration, but this picture can be seen in other exudative maculopathies with CNV. In this type of degeneration tissue destruction is fulminant, ending definitely with scarring, without functional tissue.

CNV occurs in 5-10 percent of people with pathological myopia. Because of bulbus growth, elongation across central axis leads to thinning of eye coating and forming “staphyloma” which are bulges of the posterior part, at macular region. This is predisposition for development of CNV, because of possibility of appearance of cracks in lower layer of retina, beneath pigment epithelium. Through these cracks burst choroidal newly formed blood vessels-CNV, which are destructing pigment and neurosensory apparatus of retina, leading to extreme and irreversible destruction of central vision. Until appearance of PDT – there were no possibilities for effective treatment of CNV in these eye conditions.

Clinical examination is no doubt, even with appearance of new diagnostic possibilities, irreplaceable. It is of great importance that the physician is educated in the field of retinal problems and diseases- medical retina.

OCT (Optical Coherence Tomography) is fast, noninvasive procedure of retinal “scanning” and detecting changes in all layers. It is gold standard in retinal diagnostic procedures.

DIGITAL ANGIOGRAPHY
Filming of the back of the eye by previously intravenous instilling of contrast (fluorescein), “blood circulation” is marked and observed for anomalies in leaking of contrast through the wall of blood vessel. This is easy to differentiate two elemental sub-forms of wet macular degeneration- occult and classic, with different prognosis.

OCTA, the latest, noninvasive imaging technique, without contrast, without needle, for presentation of abnormal vasculature through several sections, and several levels (noninvasive angiology). Visible are changes beneath macular layer, prior to development of exudation and bleeding.

Fortunately, because of modern technology and new imaging diagnostics today we are capable to clearly differentiate certain defects in macula, to early detect them and change adequate treatment.

There is no specific therapy in case of dry macular degeneration, except prevention, and then application of LOW VISION aids. Recommended are antioxidants: vitamins, gingko preparations, Zn, Se, Lutein, Zeaxantin, physical activity, smoking avoidance, protection from blue light. With already developed defects, there are no therapeutic possibilities, at this moment.

Glasses cannot help with reading, only aids such as loupes or telescopes. Training in work with tele-monitor systems and mobile and fixed is performed in center for low vision in SVETI VID ( LVA).

Therapeutic approach until several years ago was very narrow, yet today it can be acted upon very aggressive forms- in the way to halt progression of disease, if acted timely.

Certainly, prevention and removal of risk factors are still in the first place.

The application of photodynamic therapy (PDT), it is achieved destruction of bad blood vessels-intentionally, without destruction of surrounding tissues, which was not the case with earlier generation of thermo-lasers. This type of therapy is performed in the country only in Special hospital SVETI VID, where major attention is dedicated to the problem of macular degeneration.

With wet form of macular degeneration (WET AMD), as with all maculopathies with neovascularization and macular edema (myopic maculopathy, diabetic macular edema, cystoid macular edema, edema in retinal veins occlusion ) treatment consists of application of intravitreal injections – aVEGF actually angiogenesis and neovascularization inhibitors. With this is achieved decrease of edema and barrier of “genesis” of new blood vessels that in ischemic conditions act destructively upon functional RPE tissue and photoreceptors. In comparison to early generations today there is broad selection of medications for selective application in ophthalmology.

For patients with dry form macular degeneration there is surgical solution in implantation of miniature intraocular telescopic lens.